Salomo Murtonen, CEO and CTO
The release of the open-source 3D printer firmware eventually brought about significant disruption and advancement to additive manufacturing. Today, 3D printing has established its place as an irreplaceable rapid prototyping tool that can manufacture highly customized products cost-effectively. California-based MAKEiT, Inc., a 3D printer manufacturing firm, is bringing about innovation by enabling businesses to produce plugs/molds, production aids on-demand and locally, removing the need to carry a high volume of inventory. The company is focused on building the highest quality 3D printers for professional design, industrial, and manufacturing applications.

Since its inception, MAKEiT has been striving for simplicity in design while providing rich features that solve practical problems. The company began by developing desktop and wall-mounted 3D printers, which provide users more control over their work environment. These printers also save space as they can be stacked vertically and horizontally on an existing wall, which is beneficial for businesses with limited floor space. Leveraging its years of experience, MAKEiT has developed a 2x4 3D printer, a large-format 3D printer capable of printing large parts accurately, repetitively. “MAKEiT 2x4 3D printer is designed to meet the demands of largescale 3D printing for business applications while staying true to the simple and accessible heritage of our line of 3D printer hardware,” explains Salomo Murtonen, CEO and CTO, of MAKEiT, Inc. The 3D printer is perfect for diverse applications including automotive, engineering, machine services, and design.

The MAKEiT 2x4 3D printer has a massive heated rectangular printing area of 55Lx23Wx31H inches (1400x605x800mm), where a large part can be printed in one single piece, eliminating the need for multiple print assemblies. This is perfect to make plugs and prototypes for canards, winglets, door panels, fenders, grills, hoods, bumpers, spoilers, splitters, and more in a matter of hours or days. The printer’s aerospacegrade carbon fiber print surface offers superb part-to-bed adhesion along with minimal thermal expansion. The printer’s powerful print head is capable of handling high temperatures up to 680 degrees Fahrenheit (360 degrees Celsius). Printing industrial-grade filament, such as nylon glass fiber PA6GF, nylon carbon fiber PA6CF, is their specialty. Over thousands of printing hours have been accumulated with these materials. What about the regular open market filaments? Of course, It prints not only regular PLA, PETG, PETG with carbon fiber fill, PLA with carbon fill, and even capable of printing flexible material, TPU to name a few.

Operation processes such as bed leveling, and calibration are fully automated. And with the presence of a filament run-out detector, printing is paused when the filament runs out and resumed after filament exchange. Users have 3 options to operate and monitor the printing process: 1). Via the printer’s monitoring system, an onboard 10-inch touch screen tablet, 2). Your own computer, 3) remotely via a smartphone or computer.

One thing stands out among many custom features is MAKEiT closed-loop control system known as LSP (layer shift prevention) feature. It allows printhead always maintain its position while printing, even under random interruptions. Why is this important? A 3D printed part is built layer by layer. For example, a 23in tall fender plug consists of 1400+ layers, takes about 7 days of nonstop printing to complete. During this long printing process, if the printhead loses its original position, the entire layer of the print, and every layer thereafter, will be off. As a result, the part is ruined, and 7 days are wasted. The LSP is the safeguard. It eliminates possibility of layer shifts, makes sure the 2x4 printer gets the job done on time. 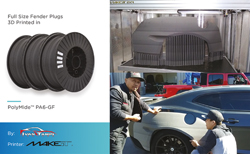 At present, MAEKiT is focused on expanding its presence in the automotive market with its 2x4 3D printer. Murtonen mentions the case of Ivan Tampi Customs, an award-winning car designer, and fabricator who used to spend weeks & sometimes months making plugs by hand. To make driver-side part symmetrical to the passenger-side part had always been challenging. Thanks to the MAKEiT’s 3D printing technology, the client can get prototypes 3D printed right out of CAD design with no extra tooling required. This new technology saves his company 75 percent of time and labor compared with the traditional plug-making process. In addition, the 3D printer ensures every part is symmetrical and maintains harmonious proportions through the process.

As a result, MAKEiT 2x4 large format 3D Printer was recognized and awarded by an international leader in automotive aftermarket SEMA (Specialty Equipment Market Association) as one of the Best New Products in Tools and Equipment Category in 2020.

Currently MAKEiT is developing a smaller version of the 2x4 3D printer called the MAKEiT 2x2 3D printer. The new printer utilizes the same technology and components as the 2x4 3D printer but in a smaller printing area, approx. 26Lx26W inches/665x665mm in X & Y direction; close to 32in/810mm in height. Product will be launched in October. Pre-orders are accepted now.

Moving ahead, MAKEiT has plans to leverage virtual reality and augmented reality in its 3D printers to streamline the design process of parts. MAKEiT is excited to bring about more innovation in 3D printing’s industrial applications. 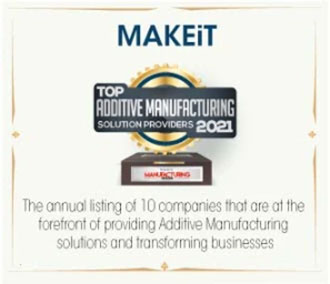